Greetings kids, and welcome to what may or may not develop into a venue for me to display, share, and pontificate on the curiosities that I "collect". I never expected to start a blawg since, as is actually the subject of this whole thing, I have a fondness for physical objects. However, I have found other such blawgs interesting and enlightening, so while this will in no way replace my zine, That's Cool, That's Trash!, nor serve as an outlet for every mundane idea that may pop into my twisted little mind ( which is what I detest about facebook and twitter), I hope it will serve some purpose to educate and entertain. And with that, fine reader, let the madness begin!


So far, 2011 has been a very good year for record collecting! I have acquired some very big wants as well as some unexpected surprises: 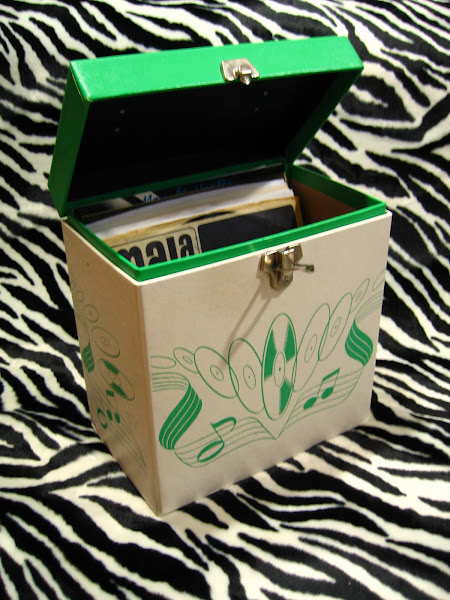 First, let me begin with a very cool vintage Platter Pak that I scored at a local record shop. I've wanted a nice one from the 700 series for a while, and this is the cleanest example I've ever seen. Plus, I really dig the design. 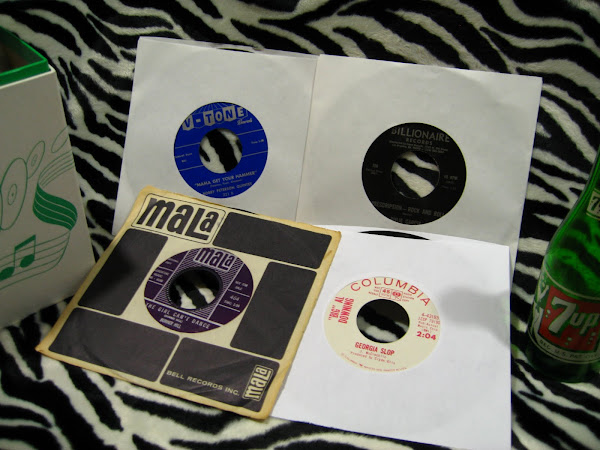 Alright, now for the records within. I scored some killer black rockers over the last few months. The first was probably one of the absolute best and hardest to find records I own, Bunker Hill's "The Girl Can't Dance" b/w "You Can't Make Me Doubt My Baby", which is made all the better by the presence of Link Wray and The Wraymen! I was lucky to score this one in flawless condition.
Next up was The Bobby Peterson Quintet's "Mama Get Your Hammer" b/w "One Day" which is a monster later covered by Barrence Whitfield and The Savages on their debut LP, though the latter pales in comparison to the original.
Finally, I just scored a very clean (almost suspiciously so) copy of "Big" Al Downing's "Georgia Slop" b/w "I Feel Good". Pretty outta style for 1964, but a classic in my book all the same! Still looking for an original company sleeve for this slab...
I've also included Rulie Garcia (AKA Jonny Chingas) with "Prescription-Rock and Roll" b/w "Candy Is Dandy". While not a black rocker, it is pretty well at home with these other killers so I threw it in. Thanks to Tim at 99 Cent Records for hooking this one up! 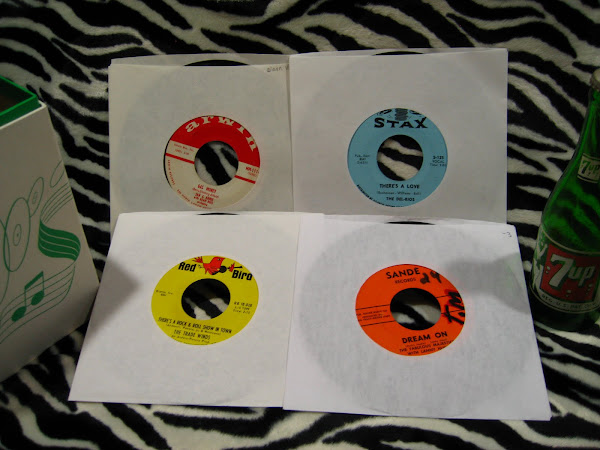 Here we have some vocal groups of sorts. The first acquisition in this serving was by The Fabulous Majestics Featuring Lanny Hunt, a local Portland soul outfit from the mid sixties, with "Dream On" b/w "Somethin' Else" (not the Eddie Cochran tune) on Sande (this is S-102, but some of you may be more familiar with S-101- the first edition of "Louie Louie" by Paul Revere and The Raiders!). Normally I don't dig soul, but this is a really powerful mid tempo tune with absolutely amazing vocals by Mr. Hunt that could give Sam Cooke a run for his money! The girls backing him ain't bad either, and the best thing is it only cost $3 up on Mississippi!
Next up was "Gas Money" b/w "Bonnie Lou" by Jan and Arnie. This is such a fun, goofy record on both sides, and I was happy to add it to the old collection!
After many, many months of searching, a copy of The Del-Rios' amazing "There's A Love" b/w "Just Across The Street" popped up on ebay. I was prepared for a fierce bidding war but ended up being the only bidder! Hooray!
Finally, while flipping through a buddy's 45s a few months back, I saw a copy of The Trade Winds' "The Girl From Greenwich Village" b/w "There's A Rock & Roll Show In Town". I forgot about the single almost immediately and wasn't reminded of it until the other day at work when I was reading a Red Bird discography. A quick text later and the trade was in place. (Thanks again, Danny!) 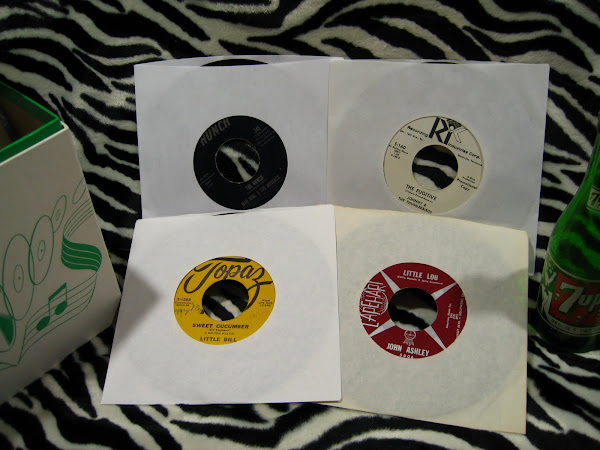 Next up is a smattering of various styles. The first score here was John Ashley's "Little Lou" b/w "I Need Your Lovin'" which has got to be his hardest single to find (with the possible exception of a picture sleeved copy of "Let Yourself Go-Go-Go" b/w "Bermuda" ). I've become somewhat infatuated with Ashley over the last couple years. He was a B-movie actor (starring in such cult classics as Motorcycle Gang and High School Caesar) turned rock 'n' roller, and his handful of singles are actually pretty good (a couple benefit from Eddie Cochran on guitar [with whom he shared a manager, Jerry Capehart] and the songwriting team of Johnny and Dorsey Burnette) with this being his stand out release.
Next up was a nice copy of Mad Mike and The Maniacs "The Hunch" b/w "Quarter To Four". If you aren't already familiar with "The Hunch", it is probably one of the most wild and absurd instrumentals with particularly killer drums! Do yourself a favor and check it out!
A few weeks later I scored a copy of Johnny and The Thunderbirds' killer version of the Lamarr Morris tune "The Fugitive" b/w "Just This Side Of Mobile". This group has a Coasters feel goin' on, but sound more like The Coasters fronted by Little Richard. Needless to say it an amazing blend of comedy and frantic rock 'n' roll!
Finally, I scored a long time want thanks to the help of my buddy, John. Little Bill Englehart had a hit with "I Love an Angel" on Dolton in 1959, but "Sweet Cucumber" b/w "Why Was I Ever Born" on Topaz is a forgotten gem outta the Seattle/Tacoma 60's scene and a pretty hard one to come by! 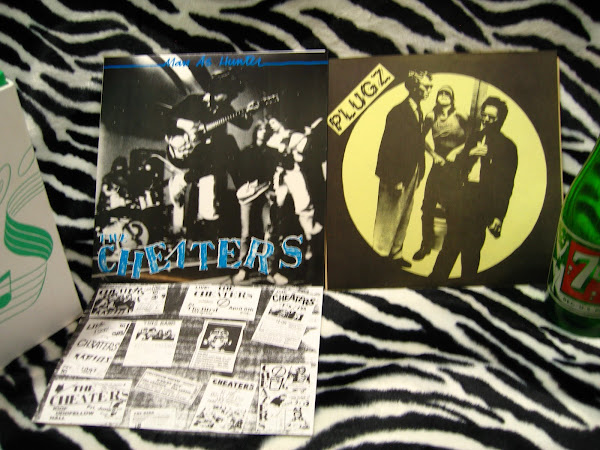 Last, but not least, I've got a couple long time punk wants. The Cheaters were Kurt Bloch's (of The Fastbacks) first project, and their cut "(How Would You Like To Be The) Ice Man?" is one amazing punk tune sounding more like The Bags than The Bags! Another Northwest killer.
Finally, I caved and splurged for The Plugz' first single on Slash. A real classic featuring the group's best material if ya ask me. More info here.

I also included an old 7up bottle in these photos. I recently went back home to visit the folks and pick up some stuff seeing as how my parents are sorta cleaning house. While I was there my mom asked what I wanted to do with the bottles in the attic. Well, I had forgotten that when I was younger, I used to collect old soda bottles! I rediscovered my small collection and brought a few choice examples back home with me. This is one of my favorite designs dating from 1951 and featuring a girl in a bathing suit swimming/downing on the label! Too cool!

Anyway, hope that was somewhat interesting and entertaining... This was just a small sampling of my collection so stay tuned for more junk in future posts should there be any future posts! Until next time-stay sick, turn blue!

Matt Mayhem
Collector of the weird, wild, and wacky!