The early to mid sixties were an exceptional time in the history of rock 'n' roll. Finally evident to everyone that, as The Showmen sang, rock 'n' roll forever would stand, many developments emerged. There was surf, Motown, soul, garage rock, and British invasion. All genres that have pretty well stood the test of time and still remain collectable and popular today. However, there is one genre from the period that is often overlooked and belittled but is just as deserving of recognition-the girl group sound. Perhaps girl group suffers from an association with the commercialization of rock 'n' roll that occurred in the early 60's which produced so many teen idols and the often sappy, square sounds they spewed, but where their male counterparts fell short, the girls were able to rise above. As my buddy Steve so eloquently put it, "These fab femmes rocked just as hard as their male counterparts, but they had an aching vulnerability that even the most sensitive or paranoid male singers couldn't approach. And although some regard this as the era of manipulative male svengalis like Phil Spector and Shadow Morton, it was also when women (girls themselves, really) emerged as some of the most preeminent songwriters, arrangers and producers. Ellie Greenwich, Carole King, Cynthia Weil, Toni Wine, Pam Sawyer and Lori Burton (among many others) co-created some of the most unforgettable and magnificent mini-melodramas in pop music history, records that now define their time and place."
Everyone knows the classic girl groups like The Shangri-Las, The Ronettes, The Angels, etc... and rightfully so, but recently I've been digging a little deeper. Just as with all genres, there are wonderful artists and tunes that never made the charts and have fallen into obscurity, but unlike with a lot of genres, the girl group obscurities have not been thoroughly explored nor comped. Here are a few of my recent finds. 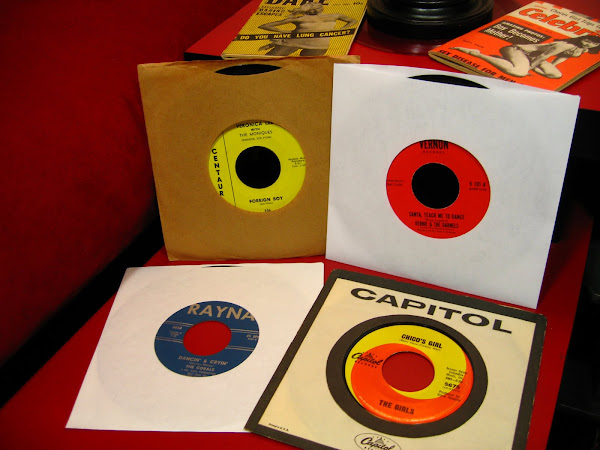 First up, I found a copy of  "Foriegn Boy" b/w "Ringo Did It" by Veronica Lee with The Moniques on the Centaur Records outta Rochester, NY. I don't know much about this record except that it came out in 1964 and Veronica Lee was only 13 at the time!
Next, I scored a copy of Debbie and The Darnels' "Santa, Teach Me To Dance" b/w "The Time" outta New Haven, CT.. This is their second record from 1962 (I believe the first is under the name The Teen Dreams), and in my opinion, their best.

Another little known gem outta New York that I found was The Corals' "Dancin' and Cryin'" b/w "My Best Friend" from 1962. I have the second press on Rayna, but it was originally issued on Kram.
And finally, I was just browsing in a local shop about a month back when I came across The Girls' "Chico's Girl" b/w "Dumb Song". The Girls were four Chicano sisters (the group originally went by the name The Sandoval Sisters) who are noteworthy, along with other such 60's girl groups as The Pleasure Seekers, for playing their own instruments. They were even sponsored by Fender, and in 1965 they were signed to Capitol. Barry Mann and Cynthia Weil wrote this, their first single and what a monster it is! 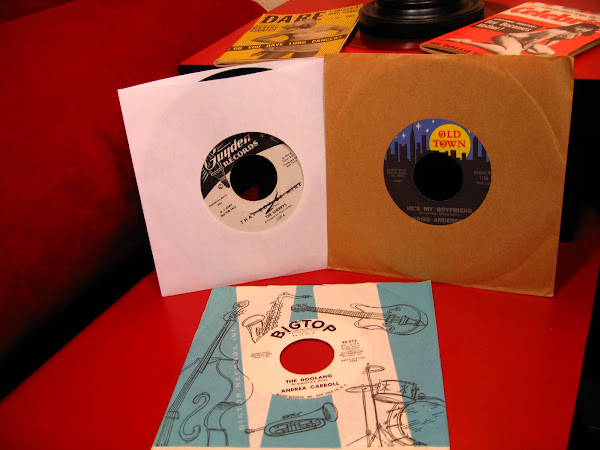 A couple months ago I had the privilege of getting a little tour of Records By Mail's warehouse here in Portland (thanks, Tim!). It was pretty mind blowing, and while I was there, I picked up a couple really amazing girl group 45s. First was Kriss Anderson's "He's My Boyfriend" b/w "The Sloopy" from 1965 and features a great spoken intro on the A side!
While there I also got a copy of Andrea Carroll's 1964 single "The Doolang" b/w "This Time Tomorrow". I'm pretty sure both of these tracks, as well as her first single on Big Top, feature The Chiffons on backups.
And the last 45 in this batch is The Sherrys' final effort on Guyden from 1963, "That Boy Of Mine" b/w "Monk, Monk, Monkey". The Philadelphia girl group found success in 1962 when their single "Pop-Pop-Pop-Eye" went to #35 on the charts, but their next few singles failed to make it anywhere, and in 1963 the group disbanded (though manager Little Joe Cook formed a new group under the same name). 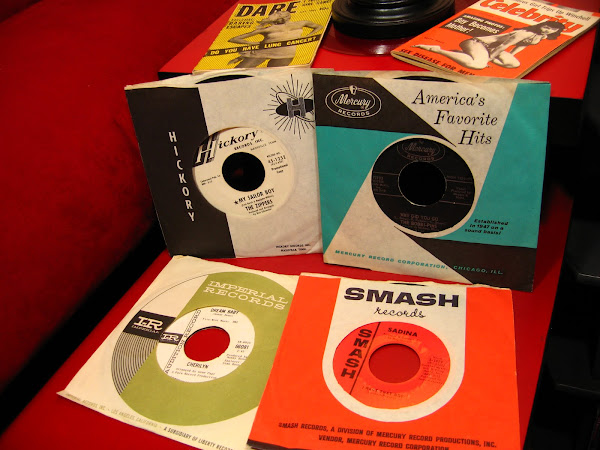 These final four records were all purchased in the last few weeks as I prepared for a DJ set. First up was The Zippers' "My Sailor Boy" b/w "Pretend You're Still Mine" which is a monster from 1964.
Next up is another offering that I know nothing about- The Bobbi-Pins' "Why Did You Go" b/w "I Wanna Love" from 1963 on Mercury
I also scored a copy "Dream Baby" b/w "Stan Quetzal" recorded by an 18 year old Cherilyn (AKA Cher) in 1964. Aside from the Philles records on which she provided backup, this is the only Cher record worth having, in my opinion, and I was luck to get it for a good price.

And last, but certainly not least is Sadina's "I Want That Boy" b/w "Who Am I Kidding" from 1965. Another one that I know very little about except that its spoken intro is certainly one of the best committed to record! 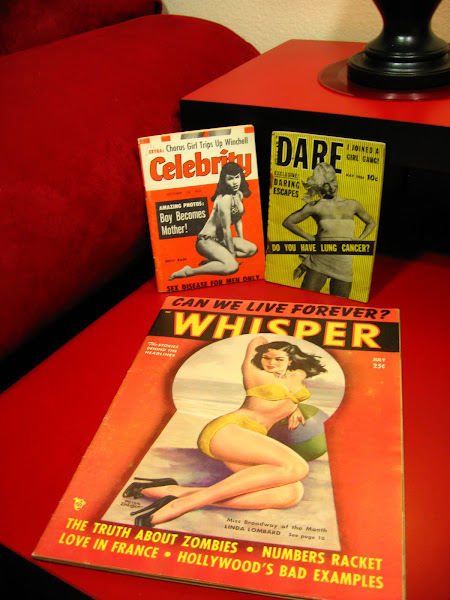 As long as we're talkin' about girls, I figured I'd include a few neat girlie mags. So they ain't related to girl group, but whatever. Many thanks to my pal Steve for sending me the two smaller rags. The copy of Celebrity from October 1955 features Bettie Page on the cover while the copy of Dare from May 1954 has a great sleazy article exposing the "truth" behind girl gangs!
I've also included one of my favorites from my personal collection. Robert Harrison is perhaps best remembered for his publication Confidential which contained all sorts of scandalous content, but his legacy also includes many girlie mags such as Beauty Parade, Titter, Wink, etc... however, he struck the perfect balance between sordid content and pin up imagery with Whisper in 1946 (featuring amazing cover art by Peter Driben). Running through 1958, Whisper never sold as well as Harrison's other publications which makes it even harder to find today. I found this copy about a year or two ago, and here's how.
There was a little book shop not far from where I used to live when I first moved to Portland, but every time I'd go by, it was closed. There weren't any hours posted, but from what I could see through the obscured windows, it was full of neat old stuff so I was eager to get in and dig around. This went on for weeks. I'd ride by on my way to or from my house only to see the lights off and door closed

until one mysterious day, as I rode my bike home, I saw the door ajar and a rack of books on the sidewalk. Of course I stopped and cautiously entered. There were towers of books and magazines on all the counters and the racks looked ready to topple if anyone so much as coughed. I told the old man behind the counter that I'd been interested in stopping by, but the shop never seemed to be open to which he replied, "Well, we're open now."
So anyway, I started diggin' around. There was a lot of somewhat interesting old books, maps, catalogs, magazines, photographs, etc... but nothing that I was interested in owning until finally, in a box under the geography section, I spotted a stack of 50's and 60's girlie magazines. It contained lots of issues of Adam and that sorta thing from the mid 60's which are a little too late and smutty for my taste, but there were a few gems. After going through the pile and pulling out a half dozen rags, I took them to the counter and asked the old guy what he wanted for them. He looked at them, then looked at me, then looked at the magazines again. This went one for what felt like a very long time before he finally said, "Fifteen bucks apiece." Well, that meant I could only afford one so I took this awesome copy of Whisper from July 1950, but I've often considered going back to see if some of the other mags I passed up are still there. I have yet to see it open again...
Posted by Matt Mayhem at 9:58 PM

Matt Mayhem
Collector of the weird, wild, and wacky!